Here's an example of a public private partnership that can 1. Help the environment.

Greening Los Angeles: Villaraigosa And Schwarzenegger On The Water Team

"Mark Twain once said, 'Whiskey is for drinking, but water is worth fighting for," said Gov. Arnold Schwarzenegger at the signing of the historic water reform legislation November 6, 2009.

Introducing and speaking alongside the Governor was L.A. Mayor Antonio Villaraigosa. 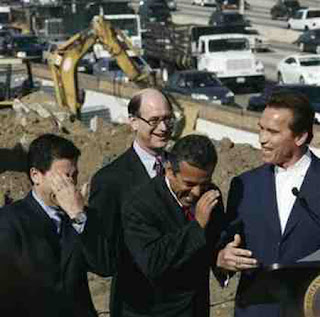 Greening Los Angeles: Villaraigosa And Schwarzenegger On The Water Team

READ FULL POST on CleanTechnica Blog
In a move that can be seen as indication of the far-reaching global effects of European cap and trade legislation, California has been selected by a British subsidiary of BP; to host one of the first hydrogen plants in the US. Hydrogen Energy International Limited will pioneer groundbreaking carbon-capture and sequestration technology in a hydrogen-fueled power plant.
When Kyoto Accord-based legislation first limited CO2 from fossil energy companies in the EU only 15% of the companies covered by The European Trading System took the future cost of carbon into account. A year later 65% were making their investment decisions based on having a carbon price.

The $2 billion, 390 MW power plant will be one of the first hydrogen-fueled electricity plants in the world with carbon capture and sequestration.

The company is part of the Hydrogen Energy group of companies owned by BP Alternative Energy and Rio Tinto. It will partner with Occidental Petroleum; the largest natural gas producer and the third-largest oil producer in California, which will use its sequestered carbon dioxide in a nearby oilfield.

The project draws on a number of technological breakthroughs to pioneer post-carbon fossil energy. While carbon dioxide has long been used to enhance oil recovery, it has not come from a power plant before now.

A coal gasification process will produce the fuel to power the plant, not with coal but with hydrogen gas. About 190 million standard cubic feet of hydrogen daily will run the gas turbines, which is another technological first: getting hydrogen to power a gas turbine.

The application is among those currently under review, along with about 10 GW of solar thermal applications for California. The status of all applications is in this (pdf) map. Despite the fact that the US itself has not passed carbon-limiting legislation, the US will still get some post-carbon fossil energy from a major oil company.

Kern County is also the host of yet another technological breakthrough: the first compressed-air energy storage project for
PG&E: California Gets Smart-Grid Funds to Bottle Wind
Image: Hydrogen Energy International
Source: Projects under review by the CPUC