The Emissary by Patricia Cori: Interpreting the Songs of the Whales to Save the Earth’s Oceans Indiana Jones-style 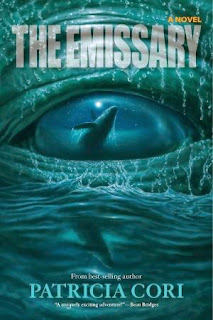 Beau Bridges, Actor: "…A uniquely exciting adventure that capture the heart and the soul of the reader."

The Emissary: Interpreting the Songs of the Whales to Save the Earth's Oceans Indiana Jones-style

Elisabeth Rohm, actor, author, activist, mother: "The whales and dolphins of this planet need our help – and Patricia Cori is their Emissary!"


Los Angeles, CA, April 29, 2014 – Fans of Animal Planet would likely call bestselling author, Patricia Cori, the "whale whisperer."  However, Cori's fans deem her a "real-life Indiana Jones."  One thing is for sure.  Cori's debut suspense book, The Emissary (North Atlantic Books) is action-packed and will soon be gracing the big screen in partnership with Global Universal Entertainment.
MOVIE TRAILER

Since its release, The Emissary has garnered positive attention around the globe.  Within the pages of The Emissary, Cori artfully engages her readers with fast action and profound, thought-provoking ideas.  "Readers will definitely think about the Earth in a different light after reading The Emissary," says Cori.  "One of the key ideas explored is how our actions today impact the environment tomorrow. We've already seen some of this come to reality, however The Emissary explores this idea and the findings are quite unsettling."

Three events take place nearly simultaneously:  People in Los Angeles witness hundreds of birds dropping from the heavens; Beaches in Maine are covered with tens of thousands of dead fish; and a New Zealand beach resort is devastated with dying whales and dolphins.  In the aftermath of this chaos, a strange, grid-like pattern forms in the clouds.  Readers soon learn that this is not a coincidence, but part of an evil plan to destroy all life on Earth. Enter, the emissary – a leading psychic, who understands and identifies secrets in the songs of the dying whales.  She then uses what she learns in her dangerous journey to avert a global disaster.

"The Emissary gives readers the thrills and action-packed adventures that we all thrive upon," says Patricia Cori.  "But it also offers something more, awareness of our oceans and the changes that have come about, due to man's interference in nature."

Meet Patricia Cori.  Cori is a bestselling author, screenwriter, public speaker and has been interviewed on hundreds of radio and television programs including CNN and Coast to Coast.   She's credited with founding the global non-profit, Save Earth's Oceans, Inc., whose mission is dedicated to restoring the balance of the ocean's ecosystems.  Cori's the former host of Beyond the Matrix (BBS Radio) and she is deemed a visionary to her fan base.

Pen Densham, Oscar-nominated screenwriter, director, producer, author, artist: "I am a giant fan of creativity that takes us out of our daily thinking. Patricia Cori has penned just such a tale. A broad fantasy adventure that speaks to those who want to think differently and challenge the daily onslaught against nature and our own future."

Ervin Laszlo, twice nominated for the Nobel prize, Founder and President of The Club of Budapest, Chancellor of the Giordano Bruno GlobalShift University, and best-selling author of 83 books and publications: "The Emissary is that rarest of books: it entertains, indeed, it fascinates, and at the same time conveys a message that we should not forget. Indeed, once we have opened this book, we never will."

New Consciousness Review: "Patricia Cori has done a great service to us all, and I believe the majestic creatures of the sea as well, by turning her skill, passion, and intelligence toward understanding and protecting them, and simultaneously illuminating a path for human transformation."

Lawrence Bloom,  Recently retired Chairman of the UN Environmental Progamme, Green Economy Initiative Council on Green Cities and the World Economic Forum at Davos Global Agenda Council on Urban Management: "It's a brilliant story – it reads with the pace of a Bond novel, and it's based in reality. You may not sleep well after you read it! I could not put it down….

Donald Newsom, President, BBS Radio Network, Inc: "Phenomenal! Her extraordinary vision and the way she communicates her truth to her readers will make Patricia Cori a staple in every library."

The Emissary by Patricia Cori: Interpreting the Songs of the Whales to Save the Earth’s Oceans Indiana Jones-style